takes readers back a century, to a time when the country was recovering from WWI, orange groves dominated southern California, Hollywood was a mecca for beautiful young women, and the Klan seemed to stand for God, family, country, and the American Way – or did it?

Human nature is a constant. The need to belong, to be appreciated, to feel recognized drives us, and when it is missing, we can be easily seduced by people and organizations offering it to us. Taking place in post WWI southern California, the often riveting, always multilayered story of The Anaheim Beauties Valencia Queen is a coming-of-age novel which proves that then, as now, validation rackets existed, seducing the lonely, the disenfranchised, the insecure, and the self-conscious, providing them with a sense of fitting in while luring them into behaviors beyond the pale.

With stealth, in 1924 the Ku Klux Klan took over Anaheim’s city council plus ten of eleven slots on the police force. In a Roaring 20’s citrus-packing suburb of 10,000 people, where the ethics of Jay Gatsby collide with those of Elmer Gantry, an aspiring high school pitching phenom, fatherless Dean Reynolds, falls under the spell of drop-dead-gorgeous Helen Webber and her agenda-driven, rich father.

But Helen, whose face graces orange crate labels shipped around the world, is using Dean as local arm-candy while sleeping her way through Hollywood casting couches. Her father and his “connections” all turn out to be Klansmen. After a shadowy motorcar accident kills a teammate on Dean’s prom night, Dean has no one safe to turn to. But the Klan is there to “help”.

Steeped in little-known California history, the story gives us characters whose problems, moral dilemmas, strengths and weaknesses are as relevant today as they were in 1924. Yesterday meets today in this provocative coming-of-age historical novel. 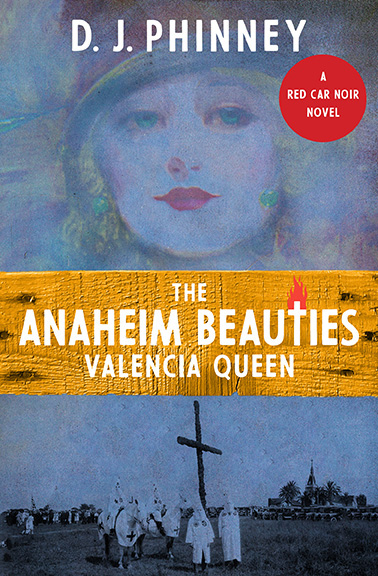